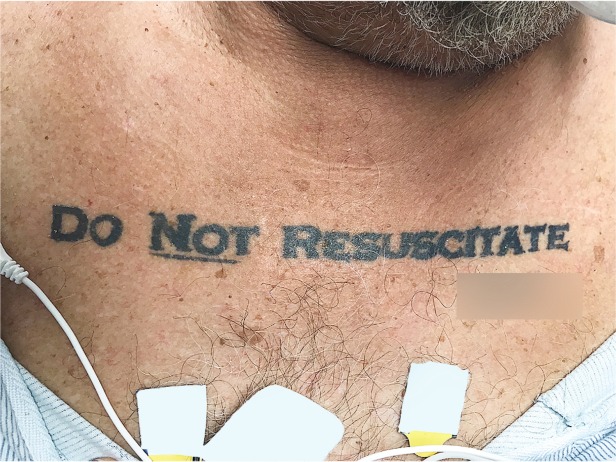 An unconscious 70-year-old Florida man was recently rushed to a Miami hospital for emergency treatment.

Tattooed across the man’s chest were the words “DO NOT RESUSCITATE”.  The man’s signature was tattooed just below the words.

The case was recorded by the emergency-room doctors in the New England Journal of Medicine.

According to their report, they made several attempts to revive him but “failed to produce a mental status adequate for discussing goals of care.”

This put the doctors in a difficult position.

This patient’s tattooed DNR request produced more confusion than clarity, given concerns about its legality and likely unfounded beliefs that tattoos might represent permanent reminders of regretted decisions made while the person was intoxicated.

Nevertheless, the team treating the man initially decided to disregard the tattoo.

We initially decided not to honor the tattoo, invoking the principle of not choosing an irreversible path when faced with uncertainty.  This decision left us conflicted owing to the patient’s extraordinary effort to make his presumed advance directive known.

However, the doctors also brought the matter to the attention of the hospital’s ethics consultants.

The consultants advised against the doctors’ decision to resuscitate the man and insisted that the directive given in the tattoo be honored.

They suggested that it was most reasonable to infer that the tattoo expressed an authentic preference, that what might be seen as caution could also be seen as standing on ceremony, and that the law is sometimes not nimble enough to support patient-centered care and respect for patients’ best interests.

Luckily, shortly after the incident, a formal copy of the man’s advance directive was found by a social worker assigned to the case.

So what can be learned from this story?

Nothing, according to the doctors involved.

If you have questions about advanced directives or estate planning, please contact me at justin@jrmccarthy.com.

Check out my new book!